skip to main | skip to sidebar

Adoption of male circumcision to fight HIV dangerous and unethical

The promotion of male circumcision is sending the wrong message, creating a sense of false protection, and placing women at greater risk for HIV.

Males are already lining up to be circumcised so that they no longer need to wear condoms and as a result, women may be the most harmed by the promotion of male circumcision," says Dean Ferris, director of the National Organisation Information resource Centres - South Africa (NOCIRC-SA).

New studies released since the three randomized control trials (RCTs) on HIV and circumcision show that RCT results cannot be applied to the general population of Sub-Saharan Africa or anywhere else.

Two studies published in 2008 concluded that male circumcision is not associated with reduced HIV infection rates in the general sub-Saharan population.

The study specifically analysing circumcision rates and HIV in South Africa found that, circumcision had no protective effect on HIV transmission.

The study indicated that infection rates between both groups leveled off at the end of all the RCTs and circumcision may only delay HIV infection, but does not affect overall rates.

A 2008 WHO report found that 1 out of 4 circumcised African males still had not fully healed at 60 days post operative.

African's overburdened health care system cannot handle the tens of thousands of circumcision complications that would result from mass circumcision campaigns," Ferris contends, "A 2008 study found that increased use of condom promotion would be 95 times more cost effective than male circumcision in preventing new HIV infections."

Ferris goes on to say, "studies have shown that the removal of the foreskin results in a less sensitive penis. A less sensitive penis coupled with the reduced sensitivity afforded by condoms, may encourage males not to use them. It is unethical for circumcisions to be carried out on adult males unless fully informed consent has been obtained. The number of reports of African males agreeing to circumcision so that they no longer need to use condoms reveals that they are consenting to the surgery and are not being fully informed of its consequences. “

Of particular ethical concern is the recent increase in advocacy for neonatal circumcision to prevent HIV.

According to the study, neonatal circumcision places newborns at immediate risk of infection, hemorrhaging, penile damage and in rare cases even death.
"It is unethical to place newborns in the immediate risk of these complications to potentially reduce their risk, if at all, of acquiring HIV 15-20 years later when other prevention methods may exist", says Ferris.

Ferris concludes, "the promotion of male circumcision for HIV prevention is fraught with logistical, monetary, ethical and human rights concerns. Proponents of circumcision have yet to suggest a long term monitoring system in order to evaluate failure or success of the exaggerated claims based on the three RCTs which are in contrast with real world population samples. While the world is desperate for a silver bullet to end the HIV epidemic, the use of male circumcision is not the answer that we have been waiting for." 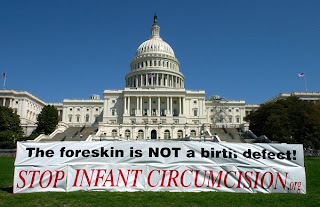 Posted by Intactivista at 12:44 AM No comments:

Cut: Slicing Through the Myths of Circumcision (Documental en inglés)

Promote Your Page Too